iTerm2 can use information it knows about your current path, host name, user name, and foreground job name to change profiles. For example, your window's background color or the terminal's character encoding could change when connecting to different hosts.

You must install Shell Integration on all machines and all user accounts where you plan to use Automatic Profile Switching (either by using the scripts or the Triggers workaround described in the Shell Integration docs).

In Preferences>Profiles>Advanced, you may specify a set of rules. 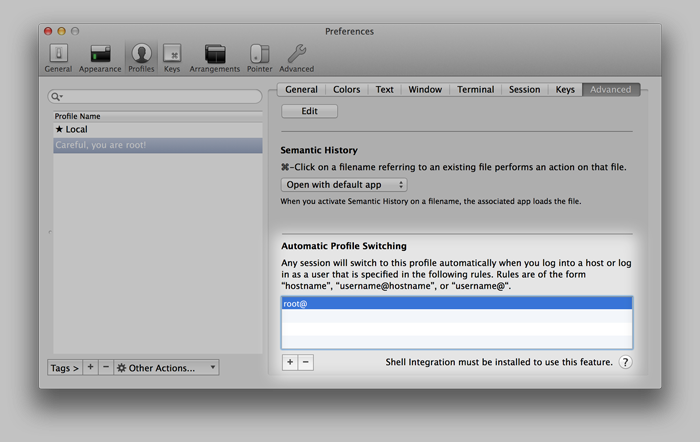 When any session satisfies a rule in a given profile, it will switch to that profile. Rules consist of three optional components: the user name, the hostname, and the path. At least one component must be present, since an empty rule is not allowed. The hostname is required only when both a user name and a path are specified.

A path always begins with a /. Any time a hostname is followed by a path, they are separated by a :. For example, iterm2.com:/users/george. It may include * wildcards.

A hostname can be a DNS name, like iterm2.com or an IP address like 127.0.0.1. A hostname may contain one or more * characters, which act as a wildcard (like globbing in Unix).

The job name is the name of the executable. For example, "vim" or "bash". It must be prefixed with an ampersand &. For example, &emacs*.

Additionally, a rule may be designated as sticky by beginning with a !. This will be described below, in the Automatic Reversion section.

Because more than one rule may match at any given time, rules with higher quality matches prevail over those with lower-quality matches. Quality is determined by a rule's score, which is computed by summing the scores for its matching parts. In order for a rule to be considered, all of its parts that are specified must match the current state.

The scoring is defined as:

The highest scoring rule, if any, will be used and the session's profile will be switched.

The UI tries to prevent you from entering the same rule in two different profiles, but if that does happen then one profile is chosen arbitrarily.

After APS switches a session's profile, its rules may eventually cease to match (for example, the hostname changes back to "localhost" because an ssh session ends). If no profile has a matching rule, the session's original profile will be restored. The exception is if the last-matched rule was "sticky". A sticky rule is prefixed with an !.

Each session maintains a stack of profiles. Initially, the stack contains the profile the session was created with. When the username, hostname, or path changes, iTerm2 finds the best-matching profile. If some profile has a matching rule, one of two things happens:

Rules may begin with ! to indicate "stickiness". A sticky rule causes its profile to stay even after the rule no longer applies, so long as no other rule matches.

Since it's impractical to install shell integration everywhere (for example, as root), there will be times when you need to write a trigger to detect the current username or hostname. Please see the Triggers section of Shell Integration for details.

There are a few ways things can go wrong. Please see the Why doesn't secure copy/automatic profile switching work? document for help diagnosing and fixing these issues.